22.11.2018
It was 4 am (Moscow time) when I stepped out of my appartment, locked the door and then lost the next 20 hours of my life in buses, taxi cabs, trains, aircrafts and stopovers. I never used to visit Seville before so when I finally came to the city and left my backpack in a booked room, I went out immediately to look at the night in the old town. If my Cologne - Seville flight wasn’t 1 hour delayed I could make it to get my pulsera before the box office booth at the Alameda de Hercules square got closed at 10 pm. Anyway, when I came to the place it was all over, only the happy people teamed up in small companies were wandering off the square. It was mildly raining in Seville that night but it didn’t prevent me from walking the narrow streets of the old town with the smile on my face.
The only poor thing was that due to my late arrival I missed the performance of the gaditanos The Magic Mor whom I had wanted to see alot.

23.11.2018
In contrary, the next afternoon I had the brief lapse of tristeza while walking alone along the streets north of Alameda De Hercules. I felt so detached from everything what was going on as I looked at the people around who were smiling and talking to each other and no one was alone there – no one except me. Just a lone man deep in his forties trying to run away from his problems, I was on the verge of crying when I came to the Jagermeister stage arranged upon the former bumper car minidrome. Baiuca was set to perform there at 4 pm. Just imagine the Banco De Gaia’ “Maya” album with all the Tibetan ethno motives being replaced with the Galician ethno motives to get an impression of what Baiuca’s music sounded like.
The Galician ethno-trance techno band was not the first band I saw that day. The DITTO stage mini-showcases were my first 'check' in the 'to-do list'. I had no idea what it would be like but it appeared to be the sequence of the performances when a band gets 5-6 minutes to come out, plug in the gear, play a song and get offstage. I was a bit late and caught only the last few seconds of Palo Alto’s performance. Then a sole guy with an acoustic guitar and a loop recorder came out. Unfortunately, I couldn’t recognize his name so he was marked simply as ‘a looper guy from Madrid’ in my travel notes. Amongst the others there were: the young band from Granada Vita Insomne, the Bjork-alike chick Mounqup, the minimalist electropop duo Fru Katinka, the slightly dreampop’y post-punk trio from Colombia Las Yumbeñas and death/core duo from Mexico Los Viejos. 14 bands in total.
That time I met no persons I wanted to meet there so I went out to get myself familiar with the surroundings. That’s exactly when I was stricken by the grief.
Upon returning to the main festival locations I saw Baiuca and then rushed to the Santa Clara buildings to see Saim. I like post-hardcore in common, and I like Saim’s post-hardcore in particular. Their album “Accidents” performed pretty well in my annual 2017 ‘best of’ list almost making it to Top 25. So their set was one of the main attractions for me. I came in and within two minutes they started playing. This made me completely satisfied as they were just as great as I might thought of them. The classic post-hardcore vocals, the perfectly synchronized rhythm section… 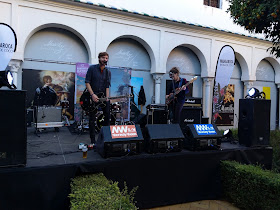 Back-to-back with Saim’s performance the Pumuky’s first actuation was scheduled. I saw them live only once before. My bad. I desperately tried to multiply that miserable number since, but never coincided with their rare performances.  That only show was the one of the Sonorama 2013 where they performed full band (“Plus Ultra” version of the band members plus La Caterva Grabaciones’ Jose A. Lopez on drums). This time it was only Jair and Noe onstage thus the sound have undergone some inevitable changes as compared to what I witnessed before. Now Jair mostly played synths and effects picking up his guitar only occasionally while Noe performed 99.9% of guitar work. Moreover, if previously Jair’s voice might be secluded within the three guitar squall and groundshaking drums now it dominated the square gaining some demonic overtones along the way. 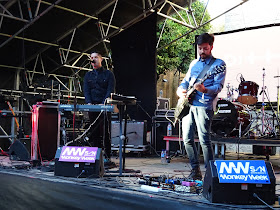 Right before Pumuky’s actuation I met Jose and Esteban from I Am Dive & WeAreWolves Records along with Maria and Nacho from San Jeronimo – the band that was set to perform later that evening at Mangaroca’s. Moreover, I briefly talked to Mladen and Alejandro from GAF. The things finally started to get in the right way, and from that moment on I never felt lonely or detached these days.
There were only two thirds of GAF y la Estrella de la Muerte onstage as Carolina (vocals, drums) and Cesar (guitar) were to arrive only the next morning. “You see the man at drums – he’s our bass player. And that guy with bass – he’s our keyboards player”, Mladen told to audience when they concluded. Nevertheless, it all sounded great. The only poor thing was the reaction of public. Frankly, there was no reaction. The ones who came to their show – most of them – spent more time chatting around than listening to the music. 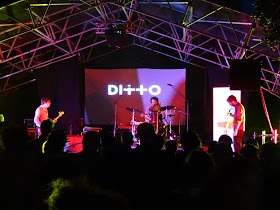 A couple of years I occasionally run into San Jeronimo’s first LP “Salinas, 20:15“ and fell in love with it immediately. This year they have released the new longplay “El Sur” which marked their shift to more synth-laden sound (the first one was rather acoustic sadcore) like if it was born in Bristol, GB. The dreamy synth passages and the ethereal voice of Maria were backed with the trembling guitar lines operated by Nacho. Their performance was arranged with the dusk and shadows – the best possible way to listen to the music of the Asturias duo. 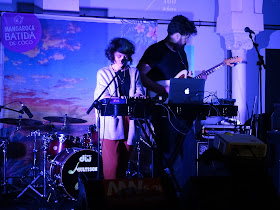 Then I rushed to my room to change the clothes and have some meal before walking off for the night section of the fest.
Cor Blanc were the first ones in my own schedule for that night. The tiny electro pop duo from Barcelona didn’t manage to gather much people inside the bar named Studio 74, but their performance was all nice, warm and funny. To entertain whose who attended their performance they incorporated some famous pop melodies into the canvas of their own compositions which added some more positive impression.
Leaving the Studio 74 in the good mood, I was put before a question how to spend the spare time before the later section of the schedule that should take place in the northernmost rock clubs. The most apparent answer was to attend the nearby Teatro Alameda whoever might play there. So I entered the building to find myself in the middle of the storm. Biznaga were playing there, and they did it ferociously. Really, they were playing so fast and hitting so hard that at times I couldn’t see the palms of the guitarists’ hands as they were motion-blurred but saw well instead how the set of drums is literally jumping upon the plinth.
My next POI were Exnovios. This neo-psych band from Navarra is co-fronted by the former Muy Fellini (whom I’m the massive fan of) frontman Juan Maravi. I managed to talk briefly to him before the concert expressing my respect to his past and present doings. The actuation itself was great. Live the band sounded ten times better than being recorded in studio. The synchronization between both singers/guitarists was perfect, and some of their melodies I was humming for a month. 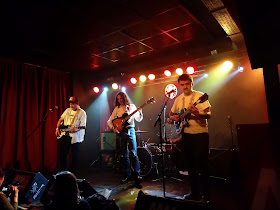 Terry Vs Tori. Usually the dreampop bands are lacking expression motionlessly staring down to the ground while playing as they follow the template given by the parent genre’s direct meaning – but this particular band apparently had the showman. Their bass player took on dancing duties relentlessly, gaining much attention and approval from public. Regarding the music, for me it sounded like the voice of the female singer wasn’t set up correctly but this was only minor complaint as everything else was fine.
Up to that point I passed over 32 kms in a day so my feet were crying out for help and understanding. My body was on the verge of breaking up. But I had to stay there to see Bifannah. Their album “Maresia” performed great in the 2017’s Top50 list so I was eager to catch them live. And I wasn’t disappointed, to speak in brief. The Galician four-piece made an atmospheric show with the right mood, perfect groove and cool vibe with their psychedelic synth-driven pop/rock strongly alluded to the Doors. It was well worth staying there for them. 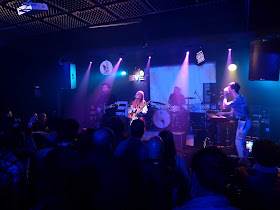 I returned to the apartments completely worn out but overwhelmingly happy. I hardly could go to sleep as I was overloaded with emotions. It was 6 a.m. when I finally made myself into the bed.